When using some of the magnets described in these experiments, for example NIB (Neodymium - Iron - Boron) magnets which are a lot stronger than those that barely hang onto the refrigerator door with a single piece of paper under it, you need to observe certain safety precautions: 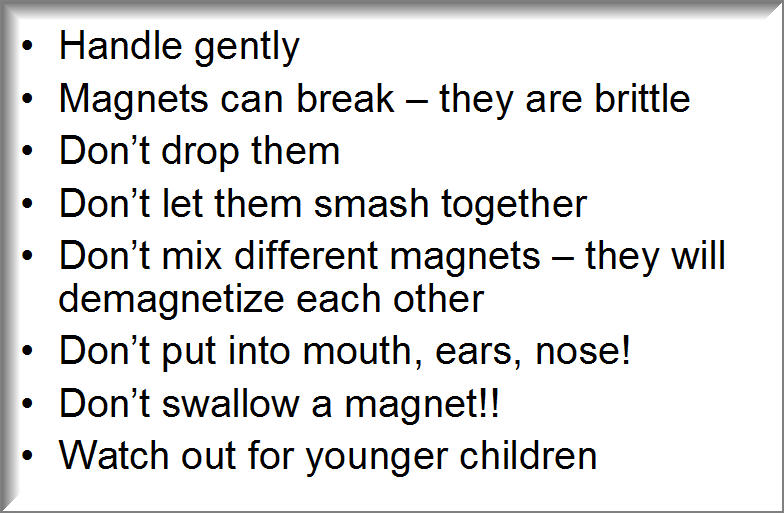 Be careful when handling strong magnets.

Don't let them snap to each other because they will chip or break and small pieces will go flying off.

Wear safety goggles so those small chips don't lodge into your eye!

Slowly allow the magnets to come together, watching that your fingers don't get pinched.  These magnets have caused blood blisters on the fingers of those who were not prepared.  (I am now prepared!)

Don't drop the magnets.  Not only will they chip or break, but the impact will also affect the strength of the magnet.

Watch out where you place these strong magnets.

If they are placed close to a video tape, portions of the tape will be erased or messed up.

If they are placed close to an audio tape, portions of the tape will be erased or messed up.

If they are placed close to credit cards, the magnetic strip on the back of the card will be erased or messed up.

If they are placed close to a floppy disk, large portions of the disk will be erased or messed up.

If they are placed close to a TV screen or computer monitor, the screen's colors will become distorted, and it is not easy to fix it!

If they come close to hearing aids or pacemakers, I don't know what might happen, and I don't want to find out!

Keep them away from small children who might want to put them into their mouths and swallow them!

Unlike the older Alnico and Ferrite magnets, NIB magnets are often manufactured in very small dimensions.  Some, used for magnetic earrings, are only about 1/8" diameter.  These may seem to be a tempting treat for young children who like to swallow small items.  Even though these magnets can be very small, they are still very strong.  This can be a big problem if they are swallowed.  For example, if two or more are swallowed, they could be in different parts of the small intestines and pass near each other.  Since they are so strong, the thin walls of the intestines would allow them to become attracted to each other, and they could stick to each other through the walls.  It would take a lot of force to pull them apart - a force that is not present within the body.  As a result, they will remain stuck in one position, squeezing the walls of the intestines between them.  They could eventually rupture the walls of the intestines and cause all sorts of problems. 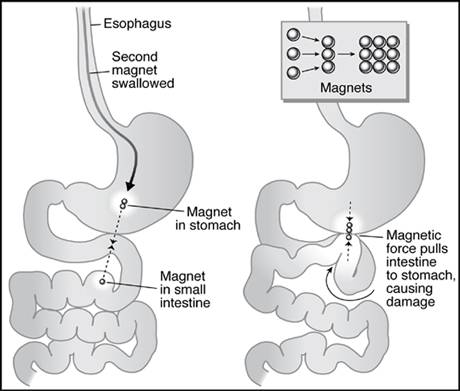 So, don't let young children play with these magnets.  Even if the magnets are part of a GeoMag type of set, they can cause problems if swallowed.  You also need to watch the younger brothers and sisters of children who own these sets.