How Do Magnets Really Work?

A magnet is something that creates a magnetic field, and in order to create a magnetic field, electrons have to move.  This means there are two basic types of magnets – those made by causing an electrical current to flow within a wire conductor (these would be electromagnets), and those made of iron or other elements (these would be either permanent magnets or temporary magnets).

Electromagnets are used within thousands of different devices – such as motors, doorbells, headphones and earbuds, transformers, compact fluorescent light ballasts, DVD players, and many more.  An electromagnet is simply a piece of wire that has electrical current (electrons) moving through it.  As the electrons move through the wire within the device, a magnetic field is created around the wire in a circular pattern.  The farther away from the wire you stand, the weaker the magnetic field will be.  This was first discovered by Hans Christian Oersted in 1820.  Since the strength of the magnetic field created by electromagnets is proportional to the amount of current in the wire times the number of turns of wire in the coil, you will usually find coils with several turns of wire wrapped around them such as in the picture below. 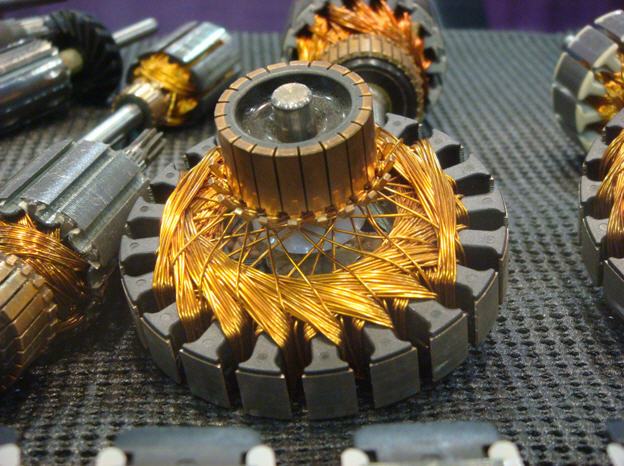 What is a permanent magnet?

To understand how a permanent magnet works, we need to start with the atoms that make up the magnet.  The electrons that whiz around the nucleus of the atom spin, creating a small magnetic field around them.  Usually, each electron is paired with another which spins in the opposite direction (called spin up and spin down).  The magnetic field from this pair of spinning electrons will cancel each other out, so there is no net magnetic field.  However, some elements have a few electrons that are not paired, so their magnetic fields can add together.  Iron, nickel and cobalt are three elements that have this property.  We can think of an iron atom as being like a tiny permanent magnet.  The diagram below is an example of an iron atom (with 26 protons and 26 electrons) with a magnetic field indicated by the arrow due to the unpaired red electrons. 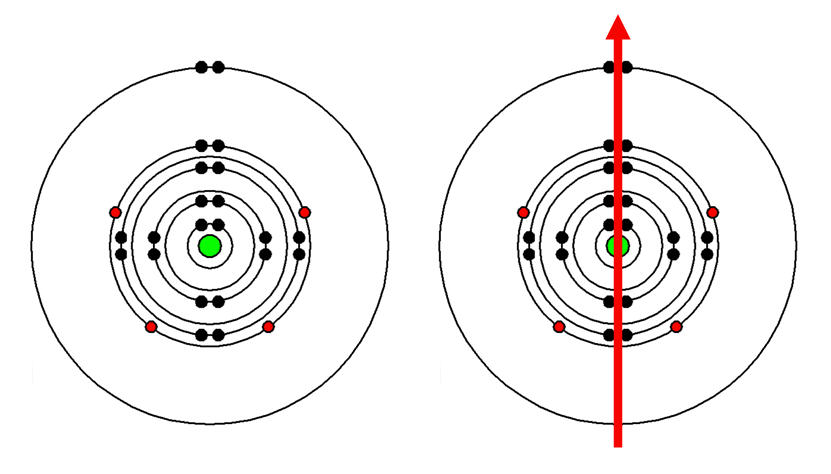 When several billion iron atoms are in a group where their tiny magnets are all lined up in the same direction, this group is called a magnetic domain.  A bar of iron will be made up of billions and billions of magnetic domains. 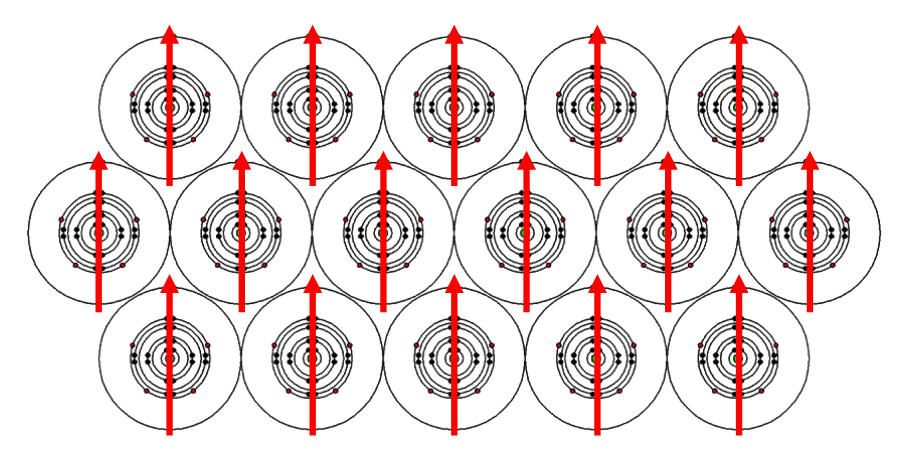 We will show this as a small square with three atoms lined up for simplicity.

However, even though the atoms within each domain are lined up in the same direction, when compared to the other domains nearby, each domain may be pointing in a different direction.  This is the case for a piece of iron that is not magnetized.  It has lots of tiny magnets within it, but they are all pointing in different directions, causing their magnetic fields to cancel each other out so there is no overall magnetic field.  This is what an unmagnetized piece of iron is like.  The diagram below is a representation of this condition.

In order to magnetize this piece of iron, we need to get all of the domains pointing in the same direction.  This can be done several ways:

d) Place the piece of iron in a North-South direction and hit it with a hammer several times, causing the domains to jiggle around and line up with the Earth’s magnetic field.

When all (or most) of the domains are lined up as shown in the diagram below, the piece of iron is considered to be magnetized.  It can be magnetized with the poles on the left and right as shown here (South on the left, North on the right):

...or with the poles on the top and bottom as shown here (South on the bottom, North on the top):

Some materials, when exposed to a strong external magnetic field, will allow their domains to line up and stay lined up even after the field is removed.  This would be called a hard magnetic material, and permanent magnets are made from this.  Examples are Alnico (aluminum, nickel, cobalt and iron), NdFeB (neodymium, iron, boron, a rare earth magnet), and SmCo (samarium, cobalt and iron, another rare earth magnet).

Other materials have domains that easily line up with a strong external magnetic field, but as soon as the field is removed, the domains become jumbled again. This is called a soft magnetic material.  These work well as temporary magnets used for transformers, motors, big electromagnets that pick up junk cars, etc.  An example of this material would be electrical steel (iron and 1-2% silicon).

a) When its magnetic domains are all jumbled up, the material is said to be unmagnetized or demagnetized

b) When its magnetic domains are all lined up, the material is said to be magnetized

d) Material that can become magnetized, but then stays magnetized, is said to be a hard magnetic material and is used for permanent magnets