A new kind of train?

We can make a self-powered "train" using a battery, two magnets, and a solenoid of copper wire.

I had tried 20 AWG, but it was too thin and didn't hold its shape well.  I also tried 16 AWG, but it was harder to wind around the dowel.  18 AWG seemed to be just right!

Then I took a 36" long, 3/4" diameter, wooden dowel (purchased from ACE Hardware) and drilled a 1/16" hole through the diameter at one end.  This is to anchor the copper wire end while I wind and shape the spool of wire onto the dowel.

It really doesn't matter what direction you wind the wire around the dowel, but if you make two of them and wind them in different directions, the battery will travel in the opposite direction.

As you wind the copper wire around the dowel, press it firmly in place, making a very uniform solenoid of copper wire.

After winding length of about 24" on the dowel, I cut the wire and then carefully removed it from the dowel.   To do this, you will need to pull the beginning end out of the hole and clip it off.  Then, gently twist the solenoid to loosen it from the dowel, then slide it off.

For demonstration purposes, I placed the solenoid into a plastic tube and fastened the ends to the tube using a zip tie at each end.  This helps protect the solenoid from little hands that like to grab and squeeze things.  :-)  (I learned the hard way).  The 24" solenoid was stretched to about 28" in order to have some air space between each turn of the solenoid.  The plastic tube is from a hardware store, and is made to fit over a 48" florescent tube to capture the glass pieces if it were to break.  I trimmed it to 28" for the solenoid.  There is no physical need to use the plastic tube.  Without the tube, it is possible to make a big circle with the solenoid so the battery can travel non-stop until the battery wears out.

The last thing you need is a battery and magnets.  An AA battery works great, and is a good size for this.  I also found 4 neodymium-iron-boron magnets that measured 1/2" diameter and about 1/8" thick.  I used two on each end of the battery.  (I put a nut onto the + end so the magnets on that end would sit flatter, but it really didn't make that much difference.)

There is a "secret" to making this work.  The magnets on each end of the battery need to have like poles facing toward the battery.  If you don't do this, and you place the battery with its magnets into the solenoid, it just sits there and gets hot!

So, once the battery and magnets are all set, simply place the whole assembly into one end of the solenoid.  It will either push itself back out toward you, or start moving through the solenoid from one end to the other!  If it doesn't move through, simply turn the battery around and then it will work.

Here's a YouTube video of one of these working:  https://www.youtube.com/watch?v=J9b0J29OzAU
It can be found as the World's Simplest Electric Train.

How does this work?

First, a review of some electrical and magnetic basics:

1.  If a bar magnet were placed onto a table top, and two smaller magnets were placed near each end, we could make both sets of magnets move in the same direction if the magnets had like poles facing toward the bar magnet, as shown here:

2.  Current will flow through a wire from the + end of the battery to the - end.  (This is the direction conventional current flows, opposite to the direction electrons flow).  So, if a battery were connected to a section of the solenoid, a magnetic field would be created within and around the solenoid as shown here: 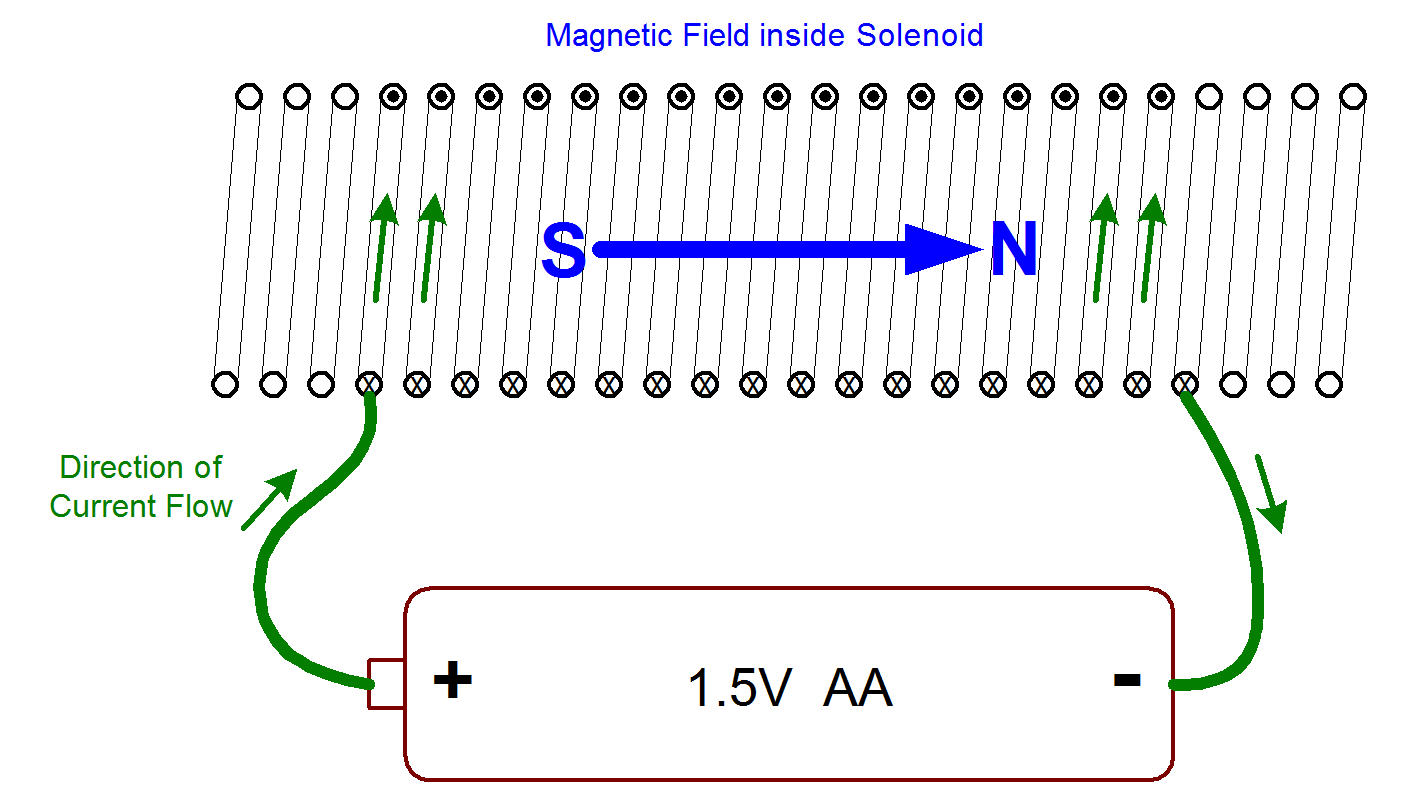 4.  Flipping both magnets around will cause the battery to move in the opposite direction through the solenoid, as shown here:

Flipping the battery around would also cause the battery to move in the opposite direction through the solenoid.

Other links to this type of experiment: